Understanding and working with NULL in SQL Server

January 30, 2019
According to database theory, a good RDBMS must implement a marker to indicate "Missing or inapplicable information".

SQL Server implements the lack of value with NULL, that is datatype independent and indicates missing value, so the logical validations are different, this is better known as Three-Valued Logic, where any predicate can evaluate to True, False or Unknown.

I see a common error, referring to null like "Null values" but the correct definition of null is "Lack of value" so you must refer to it as null, in singular form.

On this post, we will learn how to work with null in SQL Server.


For working with null, SQL Server engine uses the reserved word NULL to refer to it.
It is datatype independent so you just have to assign it to any variable or field, using the equal operator =, as you can see on this example:


If we run the statement, we will obtain these results, the same for each data type, as expected.

For inserting and updating fields with NULL we do it like on this example:

Be careful when working with null, the equal operator = is only used for assignment.

Operations and comparison against NULL


As we stated earlier, any predicate or comparison can evaluate to TRUE, FALSE or UNKNOWN, so when a value is unknown we don't know if it is true or false, so comparing or working any value with unknown is also unknown.

For example, the following operations result is NULL in all cases:


When comparing to null, we also obtain null as well, as in those examples, as you can see, even comparing null to null is unknown, and when we execute below code, we obtain NO for all:

So, if we want to compare value or column and check if is null or not what must we do?
SQL Server implements the IS NULL and IS NOT  NULL to compare against null, usage is as follows:


With these tools we are ready to work with null in our databases, so now you should follow some considerations to not impact your database performance.


As the last point, I would like to give you some tips for dealing with NULL

Prefer IS NULL over ISNULL()


When possible, try to compare predicates using IS NULL, before casting NULL to default values using ISNULL(), because casted values are not SARGABLE.

Take as an example of these two queries, they are equivalent, but the first one has better performance over the second:

These are the execution plans:

You can see the 2 differences on the 2 plans, so for this case, we prefer to stick to the first one, even if you must write more code.

Be careful with aggregations over nonexistent data


When you perform aggregations, be extra careful with no existent data, even when columns do not allow null, aggregate data that does not exist on the table returns null, contrary to what one could think can be the usual (a 0 value), as you can see on this example:

And the query results: 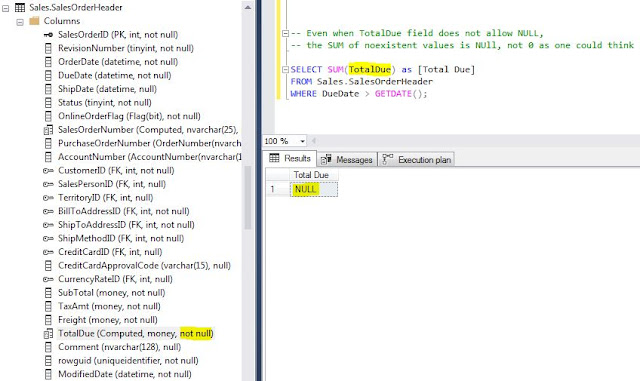 For those cases, you should use the ISNULL() function after SUM.

As I always recommend: test anything before going live, and use default values and not null columns when possible, to make your life easier. 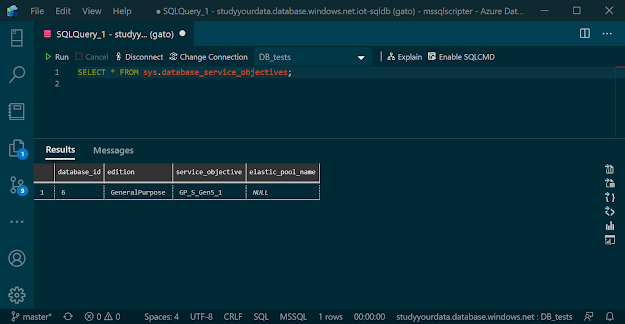 If you have to manage or work with an Azure SQL database and want to know what service tier the database is currently operating, but you don't have access to the Azure subscription or CLI. Or you want to know the status of the service tier after a scale up or scale down, directly from the database; you can do it via T-SQL Just query the sys.database_service_objectives DMO to obtain this information, this will give information about the service tier, and also will tell you if the database is part of an elastic pool or not. Basic usage (in the context of the database you need the information): SELECT * FROM sys.database_service_objectives; This will return the following information for the current database: I am running on a General Purpose tier with 1 VCore What if you want the information for all the databases created? Just change the context to the master database and execute the following query: SELECT D.name AS DB , D.create_date , SO.edition , SO.service_o

If you finally have given a try t o Azure Data Studio , and if you use it on a regular basis, maybe you want to customize it to suit your needs. Among the huge customization options it has, you can control the text size in form of zoom. To do change it, just use the following keyboard combinations: (Ctrl + = ) For Zoom in. (Ctrl + - ) For Zoom out. (Ctrl + 0) For Zoom reset.  You can see it in action: Also, as with everything on this tool, you can access this functionality from command palette (Ctrl + Shift + P) , and type "zoom" (you can fine-control the editor zoom from here): If you haven't tried it yet, you can download Azure Data Studio here .

Azure Database is the PaaS solution for SQL Server databases, on a previous post we have discussed how to create one. On this post, I want to show you how you can secure your Azure SQL Database by creating users and segregating their permissions. When you connect to your Azure Database using SSMS (or another tool), you can see the management options are very limited compared to an On-Premises instance. If you want to create a login and database user, you must create them via T-SQL, on this post I will show you how to do it. Types of logins Azure SQL database support two types of logins: SQL Server login and Azure Active directory login. In order to create Azure AD logins, you must set up an AD administrator first using the Azure portal, you configure it on the server dashboard, then accessing the Active Directory Admin, as follows: Once you set up your AD Admin, you can connect to the Azure database using this account and you can then assign proper access to o